Lea McGlothlen Honored with the Above & Beyond Award 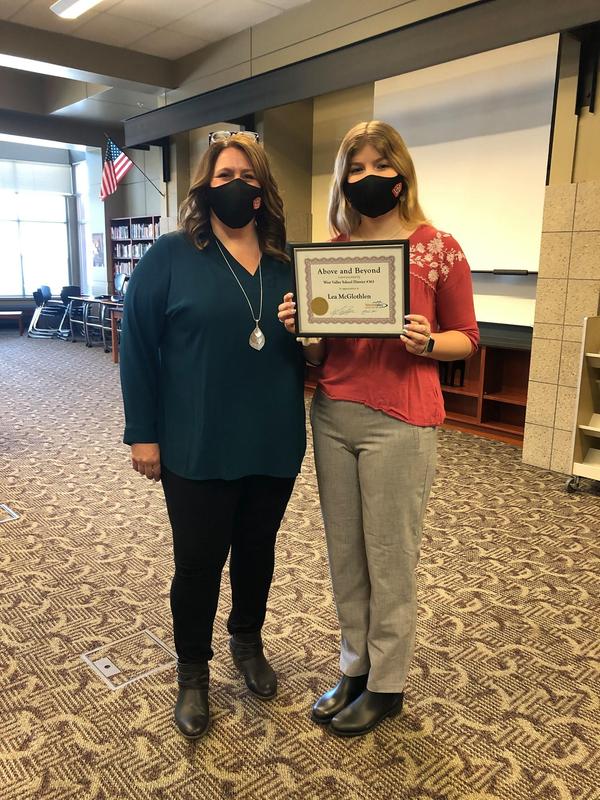 WV Senior, Lea McGlothlen, was awarded the Above and Beyond Award through WVSD.
Lea showed kindness, compassion, tenacity, follow-through, and faith when she saw a classmate of hers who did not speak English, struggling in class. She saw him on a daily basis just sit through the lectures without engaging or taking notes. She wanted to be friendly and to help but didn’t know how to start because of the language barrier. She was eventually partnered with him on an assignment and realized that he did not have a clue what to do. She wasn’t sure if he even wanted to do any of the work, but she didn’t think it was fair of her to give up on him, so she decided to use her phone to translate the instructions and when he saw her screen, his face just lit up!! She realized he wanted to do work, but was trapped by a language barrier. She said that his situation stuck with her and she wanted to help him find a solution. On her own time, she researched other products that could help him. She found a set of headphones that translates languages immediately for the listener. Then she did some more research to see if they had been used in school and reached out to a school in Texas that uses them. Then she contacted a counselor and administrator at WVHS about purchasing them for her new friend, and they both directed her to our ELL program. She reached out to ELL and they were impressed with her research but were unsure and needed to look into it. After a few weeks, she didn’t hear anything and so she reached out again and heard the good news that they were going to purchase the headphones!! Many students would not have given this much of their own time. Many would not have contacted a school in Texas. Many would have stopped at the school level when they referred her to someone else. Many would have not followed back up with ELL … but she did. Lea makes us proud!
Published March 18, 2021 Print